PREMARKET. IT'S TEMPTING TO KEEP GROWING

A positive background is forming by the opening of European stock exchanges. Negative factors in the form of increased confrontation in relations between Beijing and Washington and the lack of consensus of US legislators on expanding the household support package have so far only led to temporary rollbacks of the indices.

The upward trend in risky assets of recent months can be continued, while upward players are tempted to update the highs according to the American S&P 500 benchmark.

The energy market has reached a balance of supply and demand, which is why we are observing a decline in purchasing activity and a consolidation of oil prices near the pre-crisis values of early March.

Asian indices were able to overcome the negative sentiment from the growing conflict between the United States and China.

Chinese grounds bounced off daily lows. The Shanghai Composite stock index (3385 points) moved from negative territory to active growth (+ 0.9%), despite a sharp aggravation of relations between Beijing and Washington. Uncertainty in the implementation of the trade deal at the beginning of the year is holding back buyers from taking more action. The United States is threatening with sanctions, including against the leadership of Hong Kong. The next round of negotiations on tariffs between the two countries is scheduled for August 15. 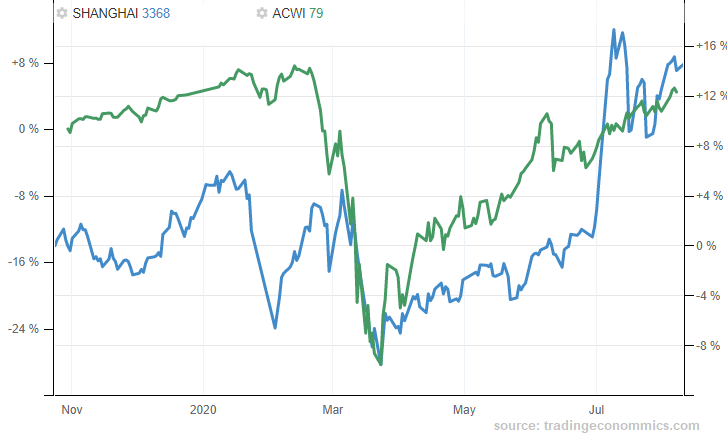 If we compare the dynamics of the Chinese market with global trends, then there is an increased resistance of the PRC market to negative environmental factors and a more confident recovery of stock prices in comparison with the reference indices. A statistical study conducted by Forbes on the risk indicators of investing in global stock markets reflected some of the advantage of emerging markets.

Investors also welcome the stabilization of the general price level in the country, which is an indicator of business and consumer activity. Thus, in July, the annual inflation rate in China rose to 2.7%, exceeding expectations. Of course, consumer inflation had the main impact. Producer prices, on the other hand, continued to stagnate, however, here, too, there is a fading of negative trends.

Thus, despite the continuing uncertainty in bilateral relations between the world's largest economies, investors are in no hurry to sell off risky assets. The positive sentiment remains mainly due to the hopes for the settlement of the conflict and support of the markets by the monetary authorities of the states.

The trading week on the US stock market ended in a neutral key. At the same time, investors were able to defend multi-month highs: all straits of the index are of a transient nature and are bought out at the close of trading. As a result, we observe the exit of the broad stock market on the S&P 500 index into the area of historical highs. On Monday morning, futures on the index of the same name are trading in a positive plane above 3350 p.

The US-PRC picking factor does not find a lasting impact on market sentiment. Moreover, there is a further drop in the volatility index, which has repeatedly told us about good prospects for growth in the market value of American shares. 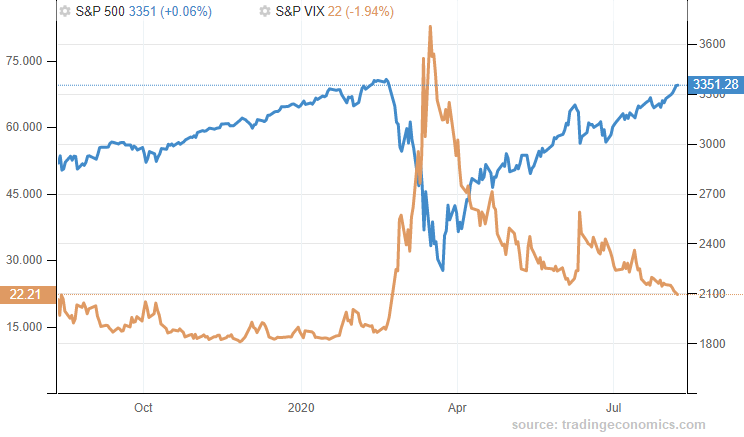 The VIX Fear Index, which reflects the mid-term sentiment of the stock market participants, rushed to the historical averages of 20 p. This means that investors are aiming at the continuation of the uptrend in the S&P 500. At least stock bulls are not afraid.

An important factor in market resilience is investor confidence that US legislators are making progress on expanding private sector aid packages. Given the improvement in the US labor market indicators, government support for consumers is still relevant.

Unemployment rate in the US, %

Unemployment is declining at a faster rate than experts estimated, but it is still above the critical levels of 10%. According to forecasts of Trading Economics macromodels, in the next 12 months. we can expect the indicator to fall to 8%.

Thus, investor expectations rule the show. Negative factors are perceived by traders as an opportunity to replenish their portfolios. The downward positions of players continue to experience pressure: sellers of assets are forced to be content with only a few percent.

The American market sets the tone for the rest of the world's stock exchanges. Less than 50 points, or 1.5%, remained until the all-time high around 3400 points on the S & P 500 in the US market. The US stock market could reach its highs much earlier, and not by November 3, as Donald Trump expects.

Oil prices in the Asian session are rising around 1% for Brent. October contracts are traded at $ 44.9. Last week, quotations managed to level the technical gap in early March amid the failure of the OPEC + deal, followed by a natural rollback.

The $ 45 area is likely to be comfortable for both commodity buyers and oil sellers. Growth in consumer and industrial demand for energy resources, as well as a decrease in drilling activity in the United States, counteract the risk of a breakdown of the trade agreement between the PRC and the USA at the beginning of the year. The factor influencing the pandemic on oil quotes is now assessed exclusively from the standpoint of countermeasures carried out by the authorities of the countries.

Thus, the market is experiencing a shortage of drivers for the directional price movement of raw materials quotations. From a technical point of view, before the quotations fix below $ 43 for Brent, it is premature to talk about breaking the multi-month upward trend. At the top, growth is limited by the area of $ 46-47 per barrel.

Gold ($ 2,029 on the spot) is trading 0.3% lower. We are observing a technical correction on the wave of a significant overbought asset from the area of absolute historical values above $ 2070. Despite the dominant trend, the short-term downtrend may continue. The psychological mark of $ 2000 acts as a support, but the $ 1980 area serves as a stronger level. Sentiment for gold is neutral due to the high speculative component of the last wave of growth.

← COMMISSION FOR BTC TRANSACTIONS INCREASED BY 420% PER MONTH

Over the past month, the fee for sending transactions over the bitcoin network has increased significantly. This is associated with a sharp rise in the rate of the oldest cryptocurrency.

GOLDMAN SACHS ALLOWED THE CREATION OF ITS OWN CRYPTOCURRENCY →

The head of the bank's digital assets department, Matthew McDermott, said that within 10 years the issuance of loans, the issuance of securities and the financial system as a whole will switch to blockchain, and explained the need for such changes