Hackers from North Korea continue to be actively interested in the cryptocurrency industry.
On May 28, East Security, a cybersecurity company, stated the hacker attempted a phishing attack by sending fake emails to clients of the UpBit exchange. In an e-mail, additional data was requested from UpBit customers for payouts on winning in a fictional lottery.

The e-mail contained a file that allegedly contained documentation for the payment. According to East Security, opening this file, which is displayed as a normal document, runs the malicious code. As a result, data on the user's computer, as well as personal keys and logins were transmitted to hackers. At the same time, the computer was connected to a remote control system.
The company East Security said that the cyber attack was carried out by the hacker group Kim Soo-ki from North Korea. 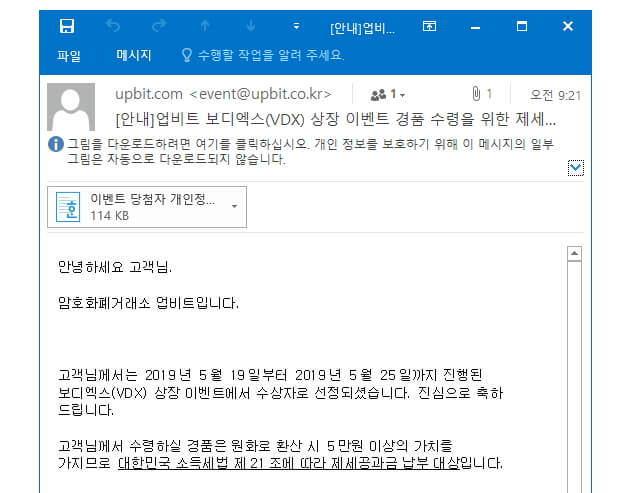 “As bitcoin prices rise, more and more customers are using exchanges. This means that the number of victims has increased, which means that the possibility of stealing passwords stored in the exchange has increased,” - said Mun Jong-hyun, head of the ESRC Center for East Security.

North Korea’s global attacks ranged from WannaCry in 2017 to targeted attacks against crypto exchanges in South Korea and neighboring countries.

China continues to put pressure on the mining industry. Local media reported that Sichuan provincial authorities began checking all mining farms that operate without the necessary documents. Earlier it was reported that the Celestial Empire wants to ban mining altogether because it believes that mining cryptocurrency creates a threat to the energy supply of the population and enterprises.

Craig Wright has a competitor: Chinese woman has registers copyrights to Bitcoin →

The US Copyright Office has received another application for obtaining the status of the creator of the source code and White Paper Bitcoin. This time, Chinese citizen Wei Liu claims to be Satoshi Nakamoto, who, according to the documents submitted, in 2018 created a test file called Bitcoin: A Peer-to-Peer Electronic Cash System and signed up under the pseudonym Satoshi Nakamoto.