Three days without Russian gas: Europeans are again on alert after an interruption in deliveries via the Nord Stream gas pipeline on Wednesday for maintenance work amid soaring energy prices.

Announced this summer by the Russian giant Gazprom, this interruption is linked to "necessary" work in a compressor station, located in Russia, of this pipe which directly connects the Siberian gas fields to the north of Germany, from where the gas is then exported to other European countries.

The flow of gas effectively fell to zero in the early hours of Wednesday morning, according to data posted online by the European gas transport network Entsog and by the site of the company Nord Stream.

Gazprom announced for its part on Wednesday that it had "entirely" suspended its gas deliveries to Europe via Nord Stream. Work “planned on a gas compressor station has begun,” the Russian group said in a statement posted on its Telegram account.

This maintenance work, scheduled until Saturday, must be carried out "every 1,000 hours", had previously assured Gazprom, owner of the gas pipeline.

But in the context of the war in Ukraine, energy is at the heart of a showdown between Moscow and the West, who regularly accuse Russia of using gas "as a weapon".

Gazprom has reduced the quantities delivered by Nord Stream by 80% over the past few months.

For the boss of the German Network Agency, Klaus Müller, the work that is beginning is "technically incomprehensible".

Experience shows that Russia "makes a political decision after every so-called 'maintenance'", he observed. 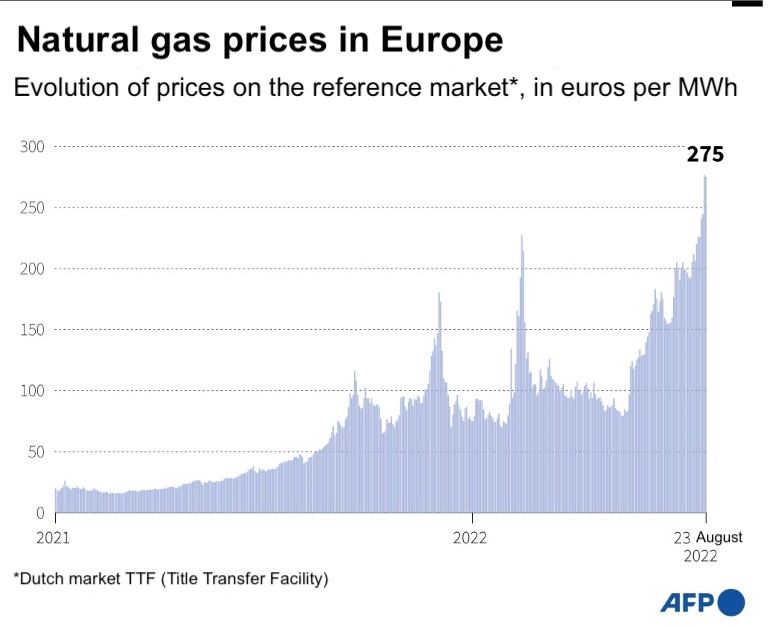 To fears of energy shortages next winter - a consequence of lower gas deliveries - is added a new jump in electricity prices which have reached peaks in recent days, risking soaring the bills of European consumers.

Asked about the resumption of flows after the three-day break, Russian government spokesman Dmitry Peskov observed that Western capitals "have imposed sanctions against Russia, which do not allow normal work to be carried out maintenance and repair".

Statements that are not very reassuring in view of past events: in July, Gazprom had already carried out ten days of maintenance work on Nord Stream.

The company had reopened the gas tap at the end of this work, but by reducing a little more the quantities delivered which currently stand at 20% of the normal capacity of the gas pipeline.

The fault, according to Moscow, to a missing turbine and which could not be returned to Russia because of the sanctions. Germany, where the turbine is located, ensures on the contrary that it is Moscow that is blocking the return of this key piece.

Before the Russian invasion of Ukraine, Nord Stream transported around a third of the 153 billion m3 of gas purchased annually by the EU.

The efforts pay off

In Lubmin, the Baltic Sea port where the gas pipeline ends, there is also uncertainty: "In July it was a long-planned regular maintenance, this time it was not planned and we don't know what is behind this operation," an official from Cascade, a company that transports gas delivered by Nord Stream across Germany, told AFP.

Faced with the risk of a major energy crisis this winter, Europe's leading economy has been struggling for several months to find alternatives to Russian gas, on which it is particularly dependent, and to reduce its consumption.

These efforts are starting to pay off, Chancellor Olaf Scholz said on Tuesday, according to whom Germany is now "in a much better position" to face the coming months.

The gas storage target set by Berlin for October, at 85%, should be reached "from the beginning of September", according to the government.

At the same time, the German industry, which is particularly energy-intensive, consumed 21.3% less gas in July compared to the average for the same months between 2018 and 2021.

And the increase in the use of liquefied natural gas (LNG) is on track: several floating terminals should come into operation this winter.

The first of these must equip the port of Lubmin and allow it to compensate for some of the volumes that no longer arrive via Nord Stream.

“We hope to be able to inject gas into the distribution network on December 1,” said Stephan Knabe of Deutsche ReGas, the company behind this LNG terminal project.

The largest marketplace of non-fungible tokens has revealed its position regarding the upcoming "Merger".

The Wall Street Stock Exchange gave up its early session gains, after the publication of data on employment and consumer confidence which could support the intentions of the Fed in terms of monetary tightening.