JO-2022: Beijing will go down in history in a freezing climate

After 2008, 2022: Beijing will become the first city on Friday to organize the Summer and Winter Olympics and thus enter Olympic history in a heavy context, between Covid, diplomatic tensions, and controversy.

As fourteen years ago, this show was conceived by the Chinese director Zhang Yimou, author in 2008 of a breathtaking patriotic and colorful celebration, featuring 14,000 extras, dancers, and acrobats, under a profusion of fireworks and special effects.

Unsurprisingly, Zhang Yimou promised a "totally innovative" show, while acknowledging that he had to take into account the winter temperatures (-6°C announced) and the epidemic threat to design his ceremony which should bring together this time "only “3,000 artists, the vast majority of whom are teenagers.

As tradition dictates, the 24th Winter Olympics in history will only officially begin once Chinese President Xi Jinping has declared them "open" according to the established formula.

But for the rest, the scenario of the ceremony like the identity of the last, or the last, bearer(s) of the flame which will set the Olympic cauldron ablaze, are protected as state secrets.

"The period is different. Our concept is simple, safe and splendid", simply revealed Zhang Yimou.

Olympic torchbearers on the Great Wall on the eve of the opening ceremony of the Beijing Olympics on February 3, 2022, in Badaling (LEO RAMIREZ / AFP)

Because the Covid-19 has been there. Due to the pandemic, these second Olympic Games under Covid, after those in Tokyo last summer, will find it difficult to be a party.

Athletes are confined in a health bubble and subjected to daily screenings. As Beijing observes a zero Covid strategy, no contact is authorized with the population and if the stands of the competition sites will be partially filled, they will be filled by "guests", who must observe social distancing.

Among the spectators of the opening ceremony boycotted by several Western countries, led by the United States, in order to denounce human rights violations in China, some twenty world leaders, including UN Secretary-General Antonio Guterres and Vladimir Putin.

The Russian president, who arrived in the Chinese capital at midday, will meet Xi Jinping, his "dear friend", for a summit where the two leaders will highlight their "common vision" in terms of international security.

An employee in a full protective suit against Covid-19, January 31, 2022, in Zhangjiakou (Christof STACHE / AFP/Archives)

Vladimir Putin and Russia are the centers of international attention. The Kremlin is accused by the West of wanting to launch an invasion of Ukraine, pointing to some 100,000 Russian soldiers deployed for weeks on the border of its pro-Western neighbor.

In this tense context, the Ukrainian government asked its representatives in Beijing not to fraternize with the Russians.

Thousands of kilometers from Beijing, in Lausanne, half a thousand Tibetans demonstrated Thursday in front of the headquarters of the International Olympic Committee (IOC) to denounce the "Games of shame".

Tibetans demonstrate against the holding of the Winter Olympics in Beijing on February 3, 2022, in Lausanne, Switzerland (VALENTIN FLAURAUD / AFP)

A pro-democracy activist from Hong Kong was arrested on Friday for "inciting subversion" ahead of a planned demonstration against the holding of the Olympics, but the mobilization for the defense of human rights and the Uyghurs is far from having a global dimension, unlike what happened in 2008.

Another controversy, that on the environmental impact of these Games which are disputed in a semi-arid climate, on artificially snow-covered slopes in oversized ski resorts for the occasion.

"Today we can say it: China is a country of winter sports", however, assured Thursday the president of the IOC, Thomas Bach.

The approximately 2,900 athletes in the running, who covet a total of 109 Olympic titles, have to deal with difficult weather conditions with, for example for the second training session for the men's downhill in Yanqing, strong gusts of wind and polar temperatures (between -36 and -28 degrees at the top of the track).

If most are focused on their sporting ambitions and participation, often unique in a career, in the Olympic Games, others, like the Briton Gus Kenworthy, digest badly to find themselves in China.

"I don't think a country should be allowed to host the Games if it has appalling human rights records," said the 2014 Olympic ski slopestyle runner-up. 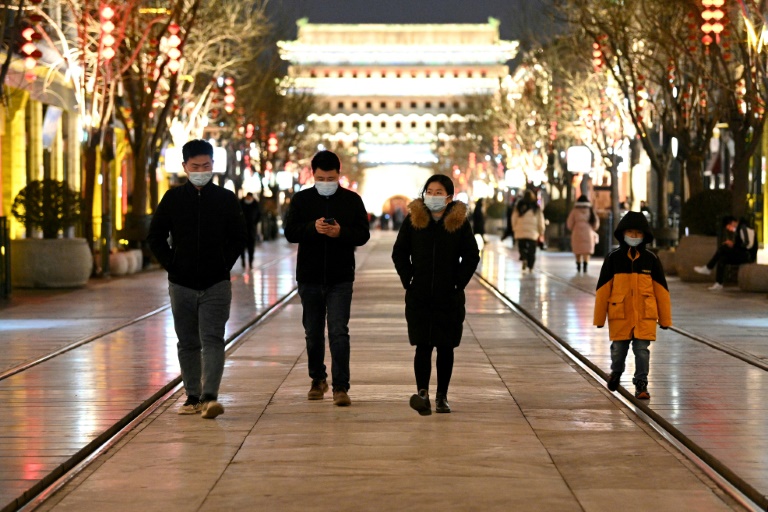 Pedestrians in a street in Beijing, January 31, 2022 (NOEL CELIS / AFP/Archives)

The Pekingese display them, in the absence of fervor, a mixture of impatience and pride: "Each ceremony is a surprise for us, I can't wait to see what Zhang Yimou has planned, who knows, he will manage to recreate his legendary ceremony of 2008," said Xing, a Chinese teacher.

For him, the decision not to sell tickets to spectators is the right one: "The pandemic is a disaster for all humanity (...) we have to make small sacrifices".

← Toshiba will split into two companies instead of three

Japanese electronics giant Toshiba Corporation will split into two companies instead of three as previously planned, the company said.

Ford weighed down by the supply chain →

Ford lost ground after trading yesterday on Wall Street, following its financial publication. The group is indeed suffering from persistent supply problems in the face, in particular, of the shortage of automobile 'chips'.