In default of payment, Sri Lanka appeals to the generosity of its diaspora

Sri Lanka on Wednesday asked its citizens living abroad to donate money to the country, which is in default and short of foreign currency to import food, medicine, and fuel.

Sri Lanka is going through its worst economic crisis since its independence in 1948. The country declared default on Tuesday on all of its external debt of 51 billion dollars, in order to free up resources to buy fuel, medicine, and other basic necessities.

Bank accounts have been opened in the United States, the United Kingdom, and Germany to collect donations from expatriates, and Mr. Weerasinghe has promised to spend the money wisely.

The Central Bank "guarantees that these foreign exchange transfers will be used only for the import of essential goods, including food, fuel, and medicine", he said.

Sri Lanka will use the $200 million it was supposed to pay creditors on Monday in interest to import essential goods, the governor said.

Contacted by AFP, several Sri Lankans living abroad greeted the appeal for donations from the central bank with skepticism.

"We don't mind helping, but we can't trust the government with our money," a Sri Lankan doctor in Australia told AFP, on condition of anonymity.

A Sri Lankan IT worker in Canada said he didn't believe the money would be properly spent.

"It could be the same as the tsunami funds," he said, referring to millions of dollars in donations the island received after the December 2004 disaster, which claimed at least 31,000 died on the island.

Many Sri Lankans suspect their leaders of pocketing some of these donations. In fact, current Prime Minister Mahinda Rajapaksa had been forced to return tsunami relief funds that had been credited to his personal bank account.

For weeks, Sri Lankans have suffered power cuts and severe shortages of food, fuel, and pharmaceuticals. A large part of the island's 22 million inhabitants found themselves plunged into misery. 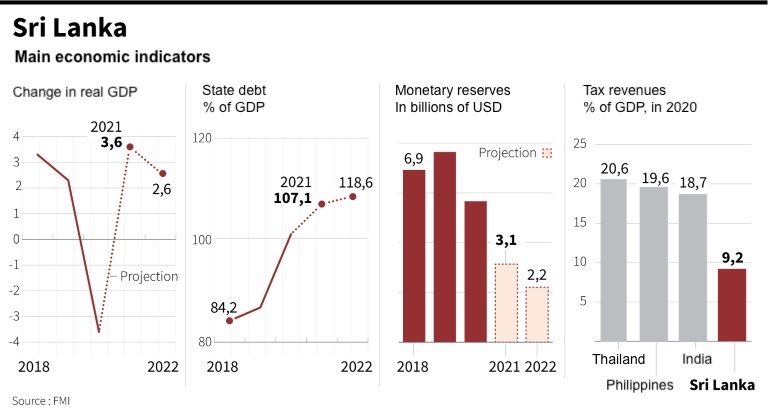 The crisis, due to the Covid-19 pandemic which deprived the country of its tourist windfall, has been aggravated by a series of bad political decisions, according to economists.

The government imposed a broad ban on imports to preserve its foreign exchange reserves.

This crisis triggered a vast popular protest movement against President Gotabaya Rajapaksa and his family clan.

In recent weeks, mobs have attempted to storm the homes of political leaders, and security forces have dispersed protesters with tear gas and rubber bullets.

Thousands of people camped outside President Gotabaya Rajapaksa's offices on the capital Colombo's waterfront on Wednesday for a fifth consecutive day of protests calling for his resignation.

← SNB criticized for lack of transparency

If the SNB is distinguished in international comparison by its great independence, this is not enough to conduct a good monetary policy, believe the economists Charles Wyplosz, Yvan Lengwiler, and Stefan Gerlach.

A rise in SNB interest rates is only expected when the ECB raises its key interest rate. This is revealed by an investigation by the KOF, in collaboration with the NZZ.