EUR / USD: STUCK AFTER THE ECB AND THE FED

The decisions that the ECB has just announced are quite close to what the markets expected and therefore triggered a controlled reaction. A rise in EUR / USD, a slight improvement in stock prices, and a slight increase in yields. In short, a slightly positive assessment of the markets.

The PEPP, a program set up to fight the pandemic, will end in March but can "be resumed, if necessary" (an important guarantee against viral outbreaks); the PEPP reinvestment period has been extended until the end of 2024 instead of 2023.

The only divergence from expectations concerns the compensatory increase in the PPP. Purchases will start at 40 billion euros monthly in the second quarter of 2022 (as expected), but will decrease to 30 billion in the third quarter and fall back to 20 billion from October. Markets expected 40 billion euros for the rest of the year.

Yesterday, the Federal Reserve provided multiple indications that its ultra-accommodative policy since the start of the Covid pandemic is coming to an end, taking aggressive action in response to rising inflation.

First, the central bank said it would speed up the reduction in its monthly bond purchases. The Fed will buy $ 60 billion in bonds each month starting in January, half the level before the November phase-out and $ 30 billion less than it bought in December. The Fed cut $ 15 billion a month in November, doubled that amount in December, and then will further accelerate the cut in 2022.

After that, in late winter or early spring, the central bank plans to start raising interest rates, which remained stable during this week's meeting. Projections released on Wednesday indicate that Fed officials see up to three rate hikes in 2022, two the following year, and two more in 2024.

The market reacted little, with decisions corresponding to investors' expectations. A slight decline in the dollar was recorded against most currencies which could reflect the unwinding of long positions before the end of the year.

The euro against the dollar has been moving in a horizontal channel between 1.1383 and 1.1220 since the start of December. This lateral consolidation is taking place within a downtrend below the descending slant and could continue with the end of the year truce.

The exit from this phase will therefore determine the next wave. If it is carried down, the pair will have to extend beyond the support on 1.1168 and could continue in this case towards the psychological threshold of 1.1000 then the technical threshold below 1.0800.

Conversely, crossing the descending and upper slant of the canal would validate a probable recovery towards 1.1525. 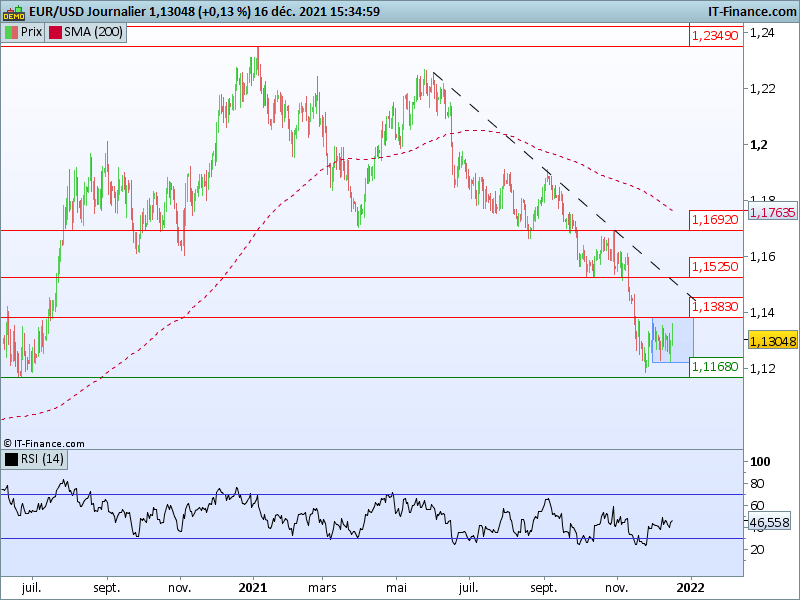 Evolution of the euro against the dollar in daily data

← OIL: THE BARREL UNDER PRESSURE

Oil begins this Christmas week in sharp decline. In New York, a barrel of US light crude for January delivery lost 4.6% to 67.6 dollars on the Nymex, while a barrel of Brent from the North Sea (due February) dropped 3.8% to 70, $ 7 in London.

Internet front page Reddit has officially launched its US listing process with the Securities and Exchange Commission. The company recently reached a valuation of $ 10 billion.