The market research company Diar unveiled a report on the 2018 financial performance of bitcoin miners.

The released data showed that the overall revenue reached $5.8 billion over the period under review. The figures plunged by 83% in terms of the start and end of the year. Specifically, miners earned $1.2 billion in January 2018 whereas the December results were just at $210 million.

The hash rate of the cryptocurrency reached its peak in H2 2018, which was followed by a decline that lasted until the end of the year. In January 2019, bitcoin left the bottom of  $3,200, which probably was the reason for some miners to bring their capacities back into operations. Record hash power left small miners with no profit amid falling prices for bitcoin. Moreover, they keep staying offline since they will be able to work in the black only if the coin is priced at least $5,000, as the report reads. 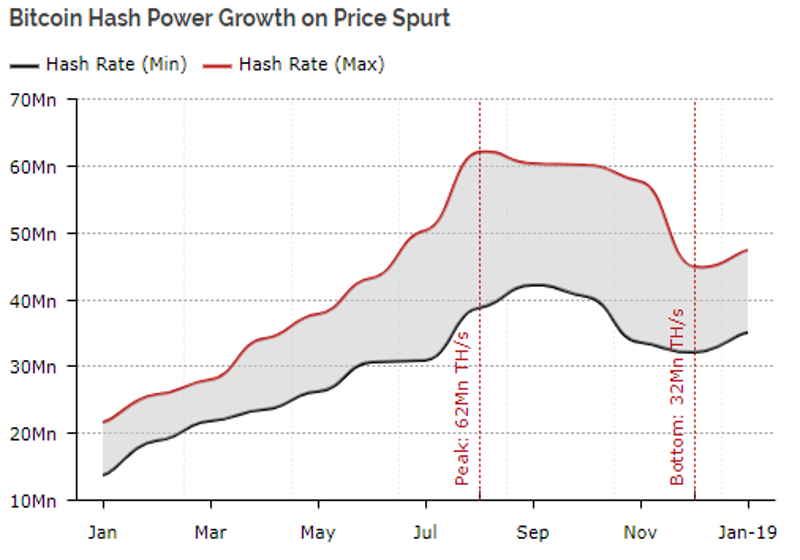 The year of 2018, however, was fruitful for exchanges, which saw a record volume of operations. The majority of large trading platforms performed better than in 2017.

"Bitcoin remains to be the lion’s share of traded volume across all major exchanges as cryptocurrency token markets plummeted last year," the report reads.

According to the Diar forecasts, the 2019 numbers will be lower compared to those in 2017 despite new assets.

The company also assessed crypto exchanges performance over the period under review. According to the available data, Coinbase BTC markets in the USA posted a 21% y-o-y increase in trading volumes in 2018, while Kraken and Bitfinex – 192% and 50%, respectively.

In addition to higher trading volumes, Coinbase also recorded an increase in the number of crypto assets transactions. The rise amounted to 14.1% over the year (82.7 million transactions in 2017; 94.4 million in 2018).

The developer of decentralized economy application from Detroit – Totle – managed to get $1 million in investments during the closed funding round. The key investors were Arrington XRP, NEO Global Capital, and Goren Helm Ventures. The received funds will be "to accelerate global growth in the B2B space and expand solutions offered, including native wallet integrations and swap widgets".

The Cryptopia crypto platform from New Zealand announced a suspension of the trading operations due to a security incident that caused heavy losses. The concerns among its users started arising early Tuesday given several reports about unscheduled maintenance at the platform that was made in the course of the day. The platform informed state authorities once the incident was detected.