Alone in the ruins of Angkor: the jewel of Cambodia timidly reconnects with tourism

Admire at sunrise the reflection in the water of Angkor Wat - the most famous temple in Asia, alone in the middle of the ruins: a unique experience acclaimed by a handful of tourists since the reopening of Cambodia after two years of closure.

"It's incredible to see so few people, so different from my previous visits," enthuses Marjan Colombie, who came from Belgium to admire the site which has benefited from major renovations since the coronavirus pandemic.

Before the health crisis and the strict travel restrictions imposed by the Cambodian authorities, you had to queue to climb the towers of the complex or try to take the perfect photo by the lake that borders it.

Further north, the Bayon Temple, famous for its faces carved in stone, and the Ta Prohm, strangled by gigantic roots, looked like crowded amusement parks.

After vaccinating the majority of its population, Cambodia has gradually reopened to international visitors in recent months.

But tourists are still very few in Angkor.

Only 30,000 have visited the former capital of the Khmer Empire (9th-14th centuries) since the beginning of the year, listed as a UNESCO World Heritage Site since 1992.

Before the pandemic, there were more than 2 million each year. 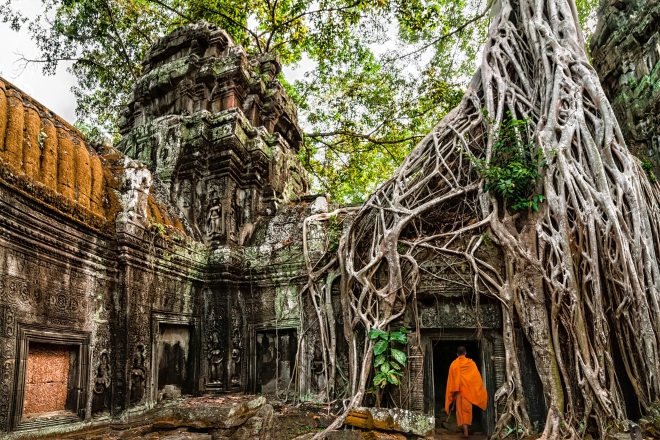 The shortfall is huge. Angkor, the largest archaeological site in the world (400 km2 - four times Paris), generates most of the country's tourist receipts.

The latter collapsed, to 184 million dollars last year against nearly 5 billion in 2019, before the health crisis.

Many traders and hoteliers around the archaeological park have gone out of business.

Chea Sokhon, general manager of the Sarai Resort and Spa hotel, was able to reopen his establishment, which had been closed for two years.

The return of the first tourists gives him hope.

After laying off almost all of its hundred employees in the spring of 2020, it rehired a dozen of them.

"It's as if we were starting from zero," said the hotelier, who also sits on the tourism board of Siem Reap, the gateway to the temples.

According to him, 20% of the city's hotels have reopened since the beginning of the year. 30% would do so.

After being forced to teach English online to feed his family, tourist guide Meth Savutha is also back on the site.

"The groups have not yet returned. We hope that business will really pick up at the end of the year".

If the pandemic has been catastrophic financially, it has allowed certain temples, battered by mass tourism, pollution, tropical vegetation, and monsoon rains, to recover their health.

Repairing the fragile sandstone facades, hiring gardeners to remove shrubs from the cracks, and installing an irrigation system to keep the grass green during the dry season: a lot of work has been undertaken since the start of the health crisis.

"Our temples also needed to rest," notes Long Kosal, spokesperson for the Authority for the protection of the site and the development of the Angkor region.

The park remains very fragile. The religious buildings in sandstone are the only survivors of the mortal embrace of the forest, the vegetation, the monsoon, and the termites having got the better of the houses and the palaces of wood covered with tiles and thatch.

To protect the authenticity of the site, in the spring of 2021 the authorities vetoed a titanic project, "Angkor - the Lake of Wonders", carried out by the Nagacorp casino group in Phnom Penh.

Planned some 500 meters from the regulated area, over an area of ​​75 hectares, it included the construction of a water park, a park dedicated to new technologies, a high-end hotel complex...

New daily flights to Siem Reap from Singapore have been opened.

In a few years, mass tourism could soon be back in "the lost city", abandoned for centuries to the jungle.

The President of the European Central Bank (ECB) Christine Lagarde assured Thursday that the exact moment of the end of the net debt purchase program would depend on economic indicators, a few hours after the vice-president of the institution had mentioned the month of July.