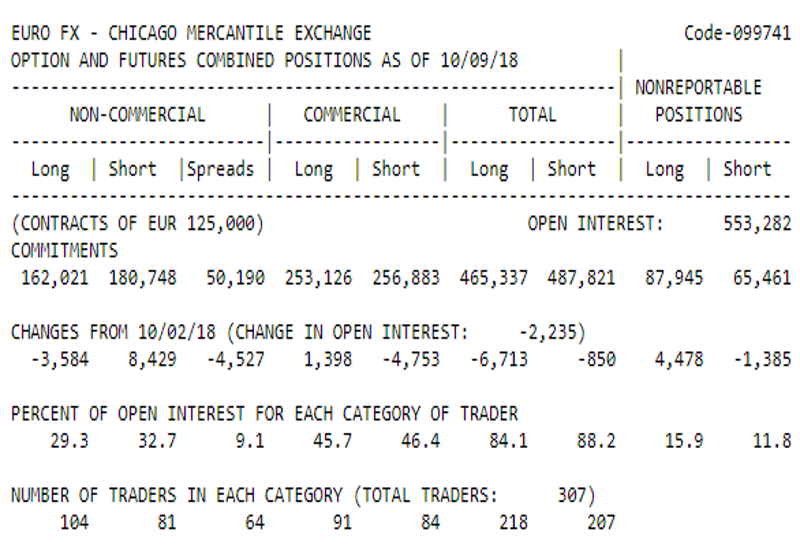 Commercial traders decreased net long position on EUR/USD contracts by 6,100 to 3,800. They have lowered positions for the second week after an almost 4-week increase.

Open interest dropped by some by 2,200 to 553,282 contracts. Bearish index of large speculators (short and long positions) amounts to 0.08 to 1.12 over the period under review.

Summary: COT reports on EUR/USD show soaring bearish sentiments in terms of the euro. Notably, the uptrend has been seen for 2 weeks already. Large traders have been expanding net position on the euro decline. At the same time, commercial traders almost completely reduced positions on the euro-dollar increase. Further trend development can promote a weakening of EUR/USD.

Notice: COT data is fundamental and used for mid- and long-term trading. Large speculators or non-commercial (banks, investment funds) usually trade in line with the trend. At the same time, small speculators (nonreportable positions) usually have no strong impact on the market. Net position is the difference between the number of contracts for buy and sale. Open interest means the total number of opened positions in the market.

The Eurostat September inflation report has hardly surprised the market. Specifically, the euro area inflation in September came in line with the forecasts voiced in the market. The rate increased by 2.1% y-o-y over the period under review. In September, consumer prices rose at the August pace. However, core inflation in September added only 0.9% in September, as it was recorded in August. In this context, the market expectations regarding the changes failed to come true – analysts anticipated an increase of 1%. The core CPI does not include hiking prices for power sources and food, including alcoholic. This means that the September inflation was mainly driven by the prices for energy sources, which is quite natural given more expensive petroleum and other fuel in the euro area in September (9.5% up y-o-y) amid soaring oil quotes. Spain and Germany gained the palm in terms of the September inflation: CPI rose 2.3% and 2.2% y-o-y respectively. At the same time, some other euro-area countries (Italy and France particularly) posted slower inflation over the same period.

Non-commercial traders raised net short position for bitcoin contracts 80 to 1,370. Large speculators have been raising net short positions for the second week after an almost 9-week decline. Two weeks ago, the net position hit an all-time low since last December when futures trading started.  As for nonreportable positions, net long positions on bitcoin contracts hiked by 80 to 1,370. Besides, they have been ramping up positions for the second week in a row as well. Commercial traders that usually sell against the main trend, did not take part in trading over the period under review. Open interest dropped by some 40 to 4,030 contracts. Bullish index of large speculators (short and long positions) decreased 0.03 to 1.74 over the period under review.