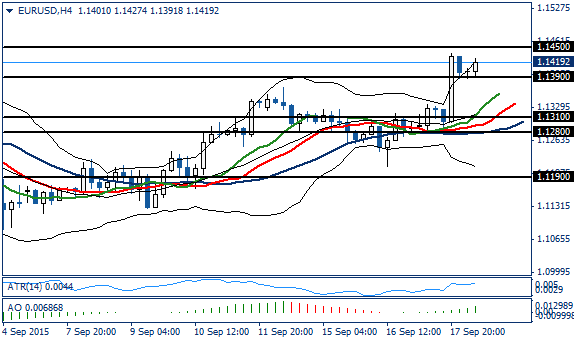 Today we can see the consequences of yesterday's Fed decision on markets. Eventually, after a two-day meeting the Fed decided not to increasing rates. As a result, the US dollar began to lose its position rapidly, there is more calm situation in the commodity and stock markets: trade continues within the trend. Thus, the dollar index has lost most of its positions, produced in a few weeks, the EURUSD rose from the level of 1.13 to 1.14.

At the end of session, oil prices has won back a part of lost positions the last day, but was unable to finish the day in a positive way. Pressure on oil directly affects the position of currencies such as, for example, the Russian ruble. The dollar \ ruble declined yesterday to level of 65, but now again it added 50 kopecks. Downward trend is maintained within the predicted range. Hope for changes of all picture under the influence soft Fed policy was not justified. On the other hand market avoided high volatility and unpredictable surges that could happen in case of rate increases, or vice versa disclaimer raising rates for a long time. In other words, FOMC chose the most "soft" option for impact on the market.

Meanwhile, global economic growth continues, the European feeling is gradually improving, as compared to what has been six months ago. This situation is developing against the US dollar and it is likely its weaken. The Fed has nothing against this development of situation, which unofficially achieves this, justifying the weakening of exports as a result of currency appreciation.

Today, it is worth to pay attention to the balance of payments data for euro zone in July, according to the forecast value of 21.3 billion euros against 25.4. However, against the background of good data on trade balance of the eurozone on Tuesday, it is probably an improvement of data. At 11:00 GMT it is expected to yield the Bank of England report about the state of economy. At 14:00 GMT in the United States there will be released an index of leading indicators for the last month, with a forecast of 0.2% compared to -0.2% in July.

It is expected growth of the euro to 1.1450 area and higher, in the case of a favorable situation in Greece. Despite the fact that the issue of Greece is closed on Sunday there will be held parliamentary elections and the current situation shows the equality of forces between SYRIZA and the "New Democracy" - about 25.0% for each party. "Golden Dawn" is on third place with 6.2%. Scandal is almost assured.

Last Friday, there was strong turbulence in the currency market, associated with the effects of conservation rates. In other words, the market anyway would be remained in overactive condition as in case of increasing rate and with its conservation at near-zero levels.