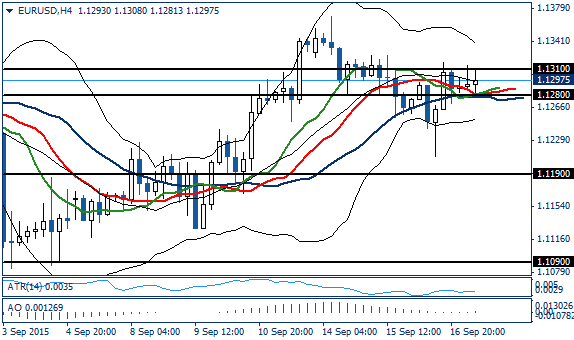 Yesterday's release of macroeconomic data from the United Kingdom and the United States surprised the market participants and breached their plans. Positive indicators on labor from England that do not meet projections, immediately began to be perceived as an excuse to increase rates soon BoE by investors, however the Fed is still preparing for the announcement of the results. The unemployment rate decreased from 5.6% to 5.5%, while the changes were not expected. The level of average earnings increased by 2.9% compared to the projected 2.5%. After that, calm of pound was over and it rushed up. There is different situation in the euro area, because there were not many positive news. The consumer price index showed an increase by 0.1% y/y versus expectations of 0.2% y/y, the core CPI decreased to 0.9% y/y vs 1.0% y/y. In the morning, euro was trading in a downtrend.

The release of inflation data in the US yesterday was the same surprising as the UK data on labor. Consumer Price Index in August decreased by 0.1% against the expected 0.0%, but the core CPI grew by 0.1% as expected. On an annualized basis - without any changes. These data were considered as an occasion for the Fed not to raise rates, afterwards euro turned up. Many market participants were caught off guard by such a small variation in the index. After 1,5 hours, investors came to life and began to buy shares actively. The OECD forecast about US GDP and its potential increase from 2.0% to 2.4%, which was released in the afternoon, was ignored. Although up to this OECD actively supported the rate increase in September. By late afternoon, the euro rose by 20 points, pound - by 148, Dow Jones - by 0.84%.

Breaking news are expected tonight. And while in afternoon it is expected publication of Italian data trade balance for July as well as retail sales for August in the UK. At 12:30 GMT in the US it is expected to yield data on building. Growth of this indicator is expected from 1.13 million to 1.15, number of new foundations will decrease to 1.16 million against 1.21 million in July, this decline is quite acceptable on the background of previous three-month growth. Forecast for the US balance of payments for 2nd quarter is positive, -111 billion against -113 billion dollars. 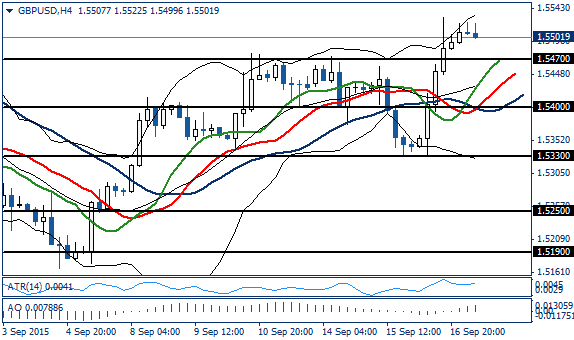 At 18:00 - The Fed will announce its decision about the rate. At 18:30 - Fed Chairman Janet Yellen will speak with an explanatory speech. In previous forecast, we have tried to explain why today Fed should to increase rates, as this will expand the future scenarios. However, you need to watch the voting results, the Fed has their own opinion on situation. If there will be rate increase, the euro will fall to levels of 1.1055 - 1.1090. The pound will fall to marks of 1.5250 - 1.5275. If the rate will not change, it gives impetus to the dollar competitors to begin the upward movement. With such developments the euro will rise to 1.1450, while the British pound reached a range of 1.5750 - 1.5805.

Today we can see the consequences of yesterday's Fed decision on markets. Eventually, after a two-day meeting the Fed decided not to increasing rates. As a result, the US dollar began to lose its position rapidly, there is more calm situation in the commodity and stock markets: trade continues within the trend.