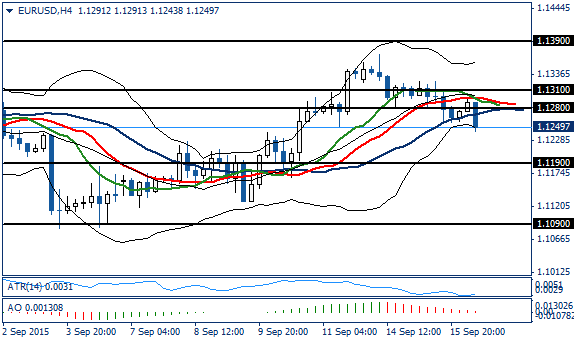 At yesterday's trading the economic data indexes tried to exert calming effect on the overbought currency under the influence of speculative factors before upcoming Fed's meeting. Some indicators of consumer prices in the UK remained unchanged, while others declined. Basic consumer price index fell by 0.2% y/y to 1.0% y/y, the total CPI fell to 0.1% y/y to 0.0% y/y. Retail Price Index showed an increase from 1.0% to 1.1% y/y, but the real estate prices the contrary dr opped: from 5.7% y/y in August to 5.2% y/y. During last session the British pound weakened its positions in 82 points. European indices came out not exactly encouraging: index of sentiment in the business environment of the ZEW institute fell from 25.0 to 12.1. Summary for euro area: from 47.6 to 33.3. The only support for euro was the trade balance, which rose from 21.9 billion euros to 22.4 in July. Of the outcome euro fell by 47 points for last day.

In the United States the situation is pessimistic too. The index of retail sales increased by 0.2% against the forecasted 0.3%, thus the basic sales index rose by only 0.1%. Industrial production showed a decline by 0.4%, against expected increase of 0.1%. Empire Manufacturing production index was 14.67 for the current month. Inventories of companies were reduced by 0.2%, compared with the July growth by 0.1%. The main support for US dollar is now the debt market. Yesterday the US government bonds showed confident growth: 2-year bonds - from 0.73% to 0.8%, 5-year - from 1.51% to 1.6%, 10-year - from 2.18% to 2.27%. Such movements can be interpreted as preparation for increasing of rates.

Today there will be the first day of the Fed FOMC meeting, main topic of the day - inflation data in the United States. The index of consumer prices in August could grow by 0.1%, if we take the annual period - an increase to 1.9%, such data may reinforce expectations of rate increases. General Consumer Price Index at an annual rate will be released unchanged - 0.2% stable.

In the near future there will be published data on labor in the UK. The index likely remains at the level of last month 5.6%, the rate of average earnings based premiums can go up with an increase of 2.5%. Today, in the euro area it is expected to yield the final estimates, forecasts for him have not changed: the basic CPI of 1.0% y/y, the overall CPI 0.2%. 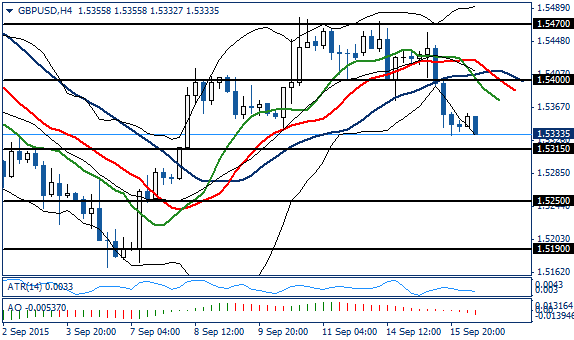