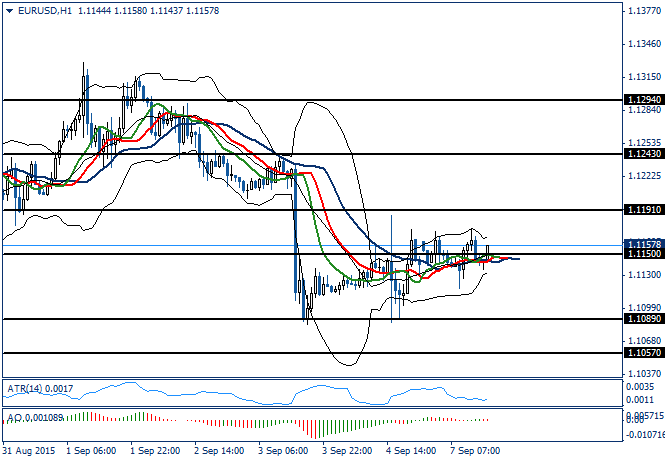 Labor market statistics, released on Friday, were rated as enough positive. Although it did not prevent the EURUSD to remain in the same place as before publication. One of the reasons was the celebration of Labor Day in the United States, because of which the dollar exchange rate was almost unchanged. Another reason was that initially the output of data on unemployment is considered a major reference point of future decision of the Fed about increasing or maintaining the interest rate at next meeting on September 16-17.

Changes in the number of non-farm payrolls showed an increase of 173k new working places, it is the smallest growth since March 2015. A leading provider of financial information, the Bloomberg agency, conducted a survey among experts, who expected an average increase in 217k. Nevertheless, the data on unemployment in the US showed the lowest value for the last 7 years, index has changed from 5.3% to 5.1%. Financial experts predicted 5.2%. Citi's Head of Strategic Planning, Steven Inglender, said in his report that these data are likely correspond to increase of GDP on 2.5% maximum. Now it is enough for increase of rates in September, but this is not enough that the US economy has taken a leading position in the race of world economies.

The most discussed news of the day - publishing of official data on reduction of China's currency reserves to 90 billion US dollars. Many analysts expect other figures which were to be more by 100-200 billion dollars. Capital Economics has given thier comment about this situation: "Today's indicators on currency reserves confirms that the PBOC does not use to maximum their available reserves, on which many traders had hoped." The currency reserves of China (3.56 trillion US dollars) was approximately equal to US reserves (3.65 trillion US dollars) a month earlier. "Total number of reserve losses was slightly less than the total sales of foreign currency. After the yen and the euro strengthened their positions last month, the value of reserves in US dollars increased by approximately $20 billion. Thus, there was sold about 110 billion by the People's Bank of China last month", - conclude experts of Capital Economics.

Thus EURUSD is planning to stay in a sideways trend till the middle of next week, 1.1089 (minimum for September 4) - 1.1191 (maximum for September 4). In case of breaking up the corridor, pair will be waiting for the resistance level of 1.1243 (maximum September 3). If the pair will continue downward trend - 1.1057 (minimum of August 12), next support level.

Eurozone on Monday was not particularly rich with news, the weak data from Europe gave euro a break under the pressure of US dollar, and led to adjustments.

On the background of recent sentiments about increasing probability of easing by the EU Central Bank the conditions of monetary policy, which negatively affected on sentiments of traders and investors, the British pound reached its lowest value for the last three months in relation to the US dollar.